Installation of a drainage system for a private house, cottage or cottage. Profi Stroy 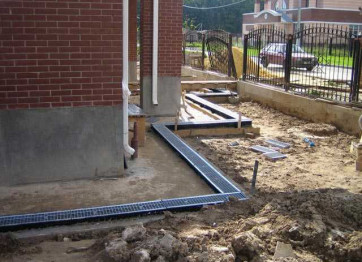 Drainage system of drainage channels necessary to remove excess water from the site in order to avoid flooding and subsequent destruction of structures and buildings. It can be equipped both at the stage of building a house and after the completion of the construction phase, but, clearly, the lack of a working drainage system in the territory in the future holds a lot of problems, namely: an unhealthy atmosphere in the house (fungus and mold), the effect of swamps, and gradual destruction foundation of construction, swelling of soil in winter, low productivity of fruit plants and trees.

We can order integrated installation of engineering systems including the device of a drainage system of any complexity.

You urgently need a water drainage system if: The site territory is in a lowland with a groundwater depth of less than three meters Frequent rains The site is located on a slope, due to which water flows from higher points during rainfall or snowmelt. The territory is located on a place without lowlands, where water could spontaneously drain.

The types of drainage systems we install

There are only two main ones:
Surface drainage is one of the simplest and least costly options. This system looks like open channels up to seventy centimeters deep and with a slope of 25-35 degrees. They usually output to one common sewage channel. Of the minuses, I can note a decrease in the usable area of the territory.

Depth drainage is one of the most effective options. Essentially an extensive system of drainage pipes. Of the advantages, I immediately note that such a system does not occupy the useful area of the site and does not require special care, and the service life is measured in decades. Cons is the cost of installation, which is relatively higher than the first method, as well as the time-consuming long installation process.

In some cases, we also install storm, linear, point and other types of drainage; ideally, all or part of these systems work together to divert water from the site.