Types of facade finishing. Why do facade decoration 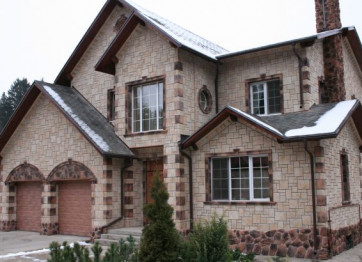 Facade structures: types of finishing the facade of the house

The facade means the external appearance of buildings and structures, which allows us to highlight the main types of finishing of the facades of houses. The main façade of the building is the part of the structure reserved for the front door, while the rear façade can only be seen at the back of the house. Distinguish between street, courtyard and side, which create a general idea of ​​a private house or a historical building, the lifestyle of the owners and the features of modern buildings of the 21st century or past centuries.

The types of facade finishing are distinguished depending on the features of the installation of facade structures using specific building materials.

In addition to wet and dry facade structures, the types of facade finishes are classified according to the presence or absence of any ventilation gaps. Thus, a distinction is made between ventilated and non-ventilated facade structures. Facade decoration with a ventilation system is carried out in order to reduce the risk of dampness and excess moisture between the finishing facade material and the wall. The facade work is slightly different when installing a non-ventilated facade, since a ventilated system is not required due to the lack of insulation and other structures where moisture can accumulate.

Why do you need facade finishing?

Building houses is a time-consuming process that requires the necessary knowledge to lay a reliable foundation, erect a house box and install a facade. Professional craftsmen will not only plan and carry out the required amount of facade work, but can also explain the advisability of installing the facade, and in what cases you can do without it.

External cladding is a practical thing, although the aesthetic component is also important for the owner of a private house. Why do facade decoration? The installation of the facade is needed to protect the supporting structure from external factors in order to reduce the likelihood of rapid destruction of the house.

If the owner is not worried about the durability of a residential building, then many professional craftsmen, when answering the question of why to decorate the facade, emphasize the need to improve the heat-insulating and sound-insulating properties of building structures, which is especially important for houses located near the highway, where the traffic does not stop. in the daytime or at night.

The services of the construction company Profi Stroy in Ukraine include not only the facing of the house, but also the choice of a facade suitable for a private house and a cottage. The construction of houses in Nikolaev is carried out using modern materials, and their selection depends on which part of the house you have to work with.

For finishing the front, side or street facade of a house, a construction company can use porcelain stoneware, which belongs to the modern generation of building materials. Among the advantages of porcelain stoneware is the fire safety of a residential building or industrial facility, a long service life, which is up to 50 years. In addition, it is easy to work with porcelain stoneware, it is quickly assembled without any difficulties.

The material is also valued for its environmental safety. Perhaps the most important disadvantage of the finishing material is its high cost. Despite the fact that the construction of houses in Odessa is an expensive procedure, for some customers the price still matters.

A more traditional material for facade decoration is brick, be it silicate, ceramic, clinker, or hyper-pressed. Brick well protects a private house and industrial facility from cold and winds, ensures heat retention for a long period of time.

In the event that the operational properties of the brick do not suit the customer, you can stop at the stone finish. When choosing between artificial and natural finishes, one should take into account the fact that natural stone façade finishing should be included in the house project before construction begins.

To order facade work in Profi Stroy, leave your name and phone number on the site to contact managers and clarify details. The Ukrainian company Profi Stroy provides ready-made house designs with different types of facades.