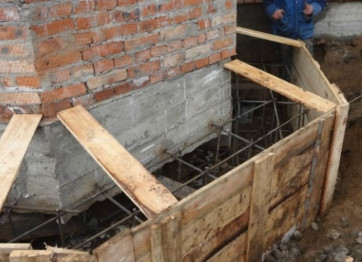 One way or another, the problem can be solved with the help of partial or full reinforcement of the foundation.

In the case of stone, brick and concrete houses, the process is complicated. They are most often erected on a monolithic strip foundation, and today the foundation of a brick house is strengthened in the following ways:

Laying a new foundation along the old one - pits are excavated at the corners of the house at a depth of 50 cm greater than the depth of the old reinforced concrete slab, 1 meter wide and long, the reinforcement cage is laid, after which it is poured with concrete mixture. Strengthening the foundation of a private house or low-rise building in this way is used in cases with minor damage.

Fill the foundation around the perimeter - the principle of operation is similar to the previous one. The only exception is that concrete mortar is poured along the entire building, and not just in the corners. In the old base, holes are made in which the bars of the reinforcement are placed to provide a more reliable connection. Next, the trenches are poured with concrete. An important requirement is the phased opening of the old concrete slab and the planned filling of new fragments.

Strengthening the foundation with screw piles (or injection method) - allows you to strengthen the old foundation while maintaining its integrity. Piles are mounted along the perimeter of the building to a depth reaching hard soil. Piles are concreted and equipped with heads, after which the harnesses are mounted. As a rule, to strengthen the foundation by injection, the cost of work is higher than other methods, but the reliability of this method significantly exceeds them. It is used for the reconstruction of ancient buildings, when it is already impossible to restore the support by other methods.

The final price can only be determined after evaluating the project. For a more accurate calculation, please contact our manager for a free consultation. Construction company Profi Stroy professionally will strengthen the foundation of the house of any complexity in Kherson and the region. Also, we can order insulation of a concrete foundation or armored belt in Kherson